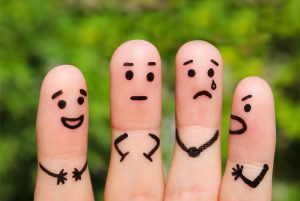 know that every moment in our lives can either be negative/positive, happy/sad, angry/pleasurable, grateful/resentful, aggressive/calming, loving/hateful …? I think you get the idea … yes, it’s true. Every emotional event depends on the meaning we give it and the values and beliefs we hold around that event. With our words, we give meaning to the experience we are having …and where focus goes, energy flows…

Let’s look at an example provided by a client of mine to see how this concept plays out.

She started the session by telling me of a phone call she had with her mother in early December. Her mother was scolding and berating her for not visiting the family home at Christmas. The mother was telling my client that she and her sister were ungrateful spoiled daughters. And the only reason to have children is so that parents will have somebody to love them when they are feeling lonely, care for them when they are old and sick and provide for them when they can no longer earn an income. And a mother’s sole purpose of living now is to love and see the grandchildren. And didn’t my client know the sacrifices made by leaving comforts of Romania just so that she and her sister could have the life they now enjoy in North America. And … …

It was at this point I stopped my client to prevent her from reliving the pain through the telling of the entire three-hour conversation.  But at the end of the phone call she felt resentful, guilty, angry and belittled.  I then instructed my client to get outside immediately and spend the next 30 to 45 minutes manually shoveling the five inches of snow which covered her sidewalk and driveway. When that job was done, she was to call me back immediately.  You see, this physical exercise primes her body and brain for the moment of teaching and accepting of new ideas. It works!! Like a magical switch.

When she called me back, she indicated, for the first time since early December she was able to stop the recording cycling through her head. We then spoke about the resentment and anger she felt will not change her mother’s values and belief system.  Instead we must relate the phone call to a different meaning for her and create a different outcome for her life and for her spouse and children. We let that phone call represent the moment when she creates a new set of values and beliefs to instill in her family. She learned to love and accept her spouse and children unconditionally rather than around unmet expectations.  She learned to appreciate the role her spouse plays in the family while she remains the primary income earner. She traded her expectations for appreciation.  She changed her blue print! (Your blue print is the rules, the values, the beliefs you have and you function from on a daily basis). Rather than nagging her children about homework, chores, house rules etcetera, she teaches them about the freedom of making choices and taking responsibility for their actions. She schedules, plans and creates moments for connections during one-on-one and family times rather than resenting the times of separation when the children prefer to hang out at the mall with their friends. She demonstrates the value of getting outside and playing hockey on the backyard rink rather than re-watching, for the umpteenth time, rerun episodes of the Big Bang Theory on television. With these strategies and actions, my client has created a different life outcome for herself and her spouse and children. When the children get old enough, she hopes the lessons of love, belonging, family connections, freedom of choice and taking responsibility will carry them through life and keep them close as a family rather than driving a deep wedge between them.

Using physical energy and changing the meaning of a moment in time, we can change the state of our emotions, change the story about our life and create a new strategy for a different and desirable outcome for our life. To change an emotion, you need to change your physiology, your focus and the words that you say to yourself.

“For it is in the moments of our decisions that we shape our destiny.”

If you’re ready to shape your destiny and create a new outcome for your life, schedule a FREE strategy session with me.

Are you ready to get RESULTS in your life?

I’ll teach you balancing the needs of your business & relationships.